FlatOut is a racing video game developed by the Finnish developer Bugbear Entertainment and published by Empire Interactive in Europe and Vivendi Universal Games in North America in 2004 and 2005. Gameplay in FlatOut places emphasis on demolition derby-style races, and features a sophisticated physics engine. 16 different cars are included, each with 5 different skins for them. The game is most known for car drivers flying through the windshield. In 2014, a Linux version of the game was released on GOG.com as part of the launch of Linux support. 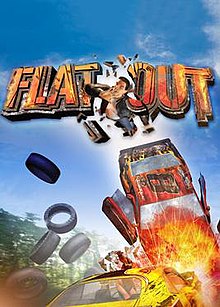