Gran Turismo 3: A-Spec (グランツーリスモ3: A-spec, Guran Tsūrisumo Surī Ei-supekku) is a 2001 racing game, the first in the Gran Turismo series released for the PlayStation 2. During its demonstration at E3 2000 and E3 2001 the game's working title was Gran Turismo 2000. The game was a critical and commercial success and went on to become one of the best-selling video games of all time. Its aggregate score of 94.54% on GameRankings makes it the second-highest rated racing video game of all time.[3] It has been listed as one of the greatest video games of all time. 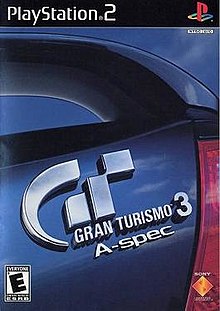