Gran Turismo 4 (グランツーリスモ4, Guran Tsūrisumo Fō, commonly abbreviated GT4) is a 2004 racing video game, and the fourth installment in the main Gran Turismo series and the sixth for the overall series. The second and final entry in the series developed for the Sony PlayStation 2, it was developed by Polyphony Digital and published by Sony Computer Entertainment and was released on December 28, 2004 in Japan and Hong Kong (NTSC-J), February 22, 2005 in North America (NTSC-U/C), and March 9, 2005 in Europe (PAL), and has since been re-issued under Sony's 'Greatest Hits' line. Gran Turismo 4 is one of only four titles for the PlayStation 2 that is capable of 1080i output, for another release being Tourist Trophy which was also developed by Polyphony, and based heavily on the physics engine of GT4. 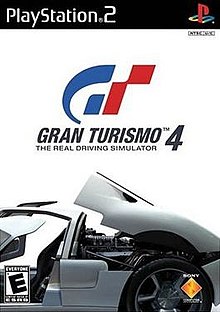