Gran Turismo 5 (グランツーリスモ 5, Guran Tsūrisumo Faibu, commonly abbreviated as GT5) is a racing video game developed by Polyphony Digital and published by Sony Computer Entertainment. It was released for the PlayStation 3 on November 24, 2010 in Europe and North America, and November 25, 2010 in Japan and Australasia, and is the fifth main installment and the tenth overall in the Gran Turismo video game series.[2][1] It was preceded by the Prologue version and is the first main entry of the series to be released for the PlayStation 3.

The game marks the first entry in the series with online races with support for up to 16 players. A damage model has been included with variations of damage depending on the car. Over 1,000 cars, 29 different locations, 77 different tracks, and a track generator are available in the game.[5] Dynamic time and weather effects make their debut in the series. World Rally Championship, NASCAR and Super GT licenses are utilized for the first time in the Gran Turismo series. 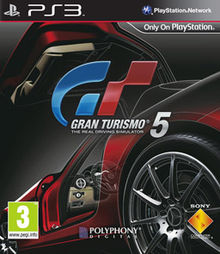