Gran Turismo 6 (グランツーリスモ 6, Guran Tsūrisumo Shikkusu, commonly abbreviated as GT6) is a racing video game developed by Polyphony Digital and published by Sony Computer Entertainment for the PlayStation 3 video game console. It is the sixth major release and twelfth game overall in the Gran Turismo video game series. It was released worldwide on December 6, 2013,[1] and was popular with critics, won awards, and topped charts in countries around the world. New features included the addition of more cars and tracks, improvements to the car customisation options, and partnerships with the Goodwood Festival of Speed, the Ayrton Senna Institute, the FIA and NASCAR. Gran Turismo 6 is the first-ever video game to have officially certified FIA content 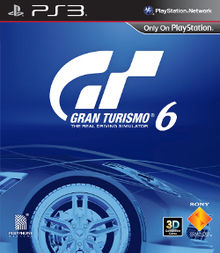