Unlike racing games that restrict the player to a race track, Midtown Madness offers an open world recreation of Chicago. This setting was said to provide "an unprecedented degree of freedom to drive around in a virtual city".[1] Players can explore the city using one of several modes and can determine the weather and traffic conditions for each race. The game supports multiplayer races over a local area network or the Internet. The game received generally positive reviews from gaming websites. 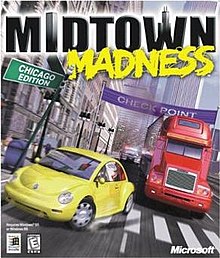