Real Racing 3 is a racing game, developed by Firemonkeys Studios and published by Electronic Arts for iOS, Android, Nvidia Shield and BlackBerry 10 devices. It was released on iOS and Android on 28 February 2013 under the freemium business model; it was free to download, with enhancements available through in-app purchases. Overtime and despite an expensive virtual economy ingame, the developers began to tolerate the use of playing with time zones in order for the players to watch unlimited ads to get free gold.

The game is the sequel to 2009's Real Racing and 2010's Real Racing 2. Primarily due to the freemium nature of the game, it received less favorable reviews than its predecessors, although the gameplay remains generally lauded.

Game features include over 45 circuits at 20 real-world locations, a 43-car grid, and over 250 licensed cars from 33 manufacturers such as Audi, Porsche, Lamborghini, Bugatti, Ford, Ferrari, McLaren and Koenigsegg. Unlike in the previous Real Racing games, players are required to maintain and service their vehicles, requiring in-game cash and real-world time. 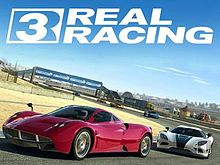