Valentino Rossi: The Game is a motorcycle racing video game developed and published by Milestone srl. The game was released for Microsoft Windows, PlayStation 4, and Xbox One on 16 June 2016. It is the official video game of the 2016 MotoGP season. The game is also endorsed by Italian professional motorcycle racer and multiple MotoGP World Champion Valentino Rossi. This was the first Videogame under Milestone srl not released on PlayStation 3 and Xbox 360. 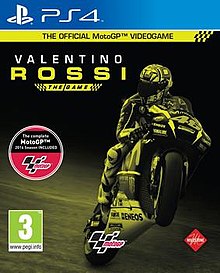