Need for Speed is an online open world racing video game developed by Ghost Games and published by Electronic Arts, released for PlayStation 4 and Xbox One in November 2015, and released on Origin for Microsoft Windows on March 15, 2016. It is the twenty-second installment in the Need for Speed series, and is a reboot of the franchise. The game was followed by Need for Speed Payback in 2017. 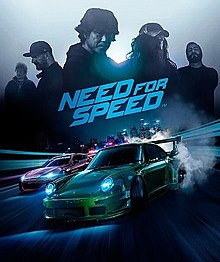