Arctic Thunder is a snowmobile racing game developed by Midway Games released as an arcade game as well as on Sony PlayStation 2 and Xbox consoles, being a launch title for the latter. In the arcade version of the game, jets blow cold or hot winds, depending on the setting, in the player's face while he or she plays the game. This is a part of Midway's Thunder series, which also included Hydro Thunder, 4 Wheel Thunder, Offroad Thunder, and Hydro Thunder Hurricane. The Xbox version of this game is not currently compatible with the Xbox 360. A Dreamcast port was also planned but was cancelled due to sagging sales of the console. 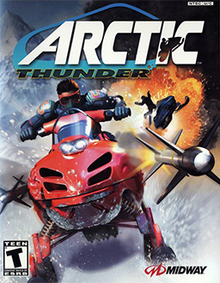