Project Gotham Racing is a racing video game developed by Bizarre Creations and published by Microsoft Game Studios. It was released exclusively for the Xbox as a launch title in November 2001. The game became the second best-selling game for the console after Halo: Combat Evolved.

Project Gotham Racing differs from most racing games in that winning a race does not necessarily mean the player advances to the next round; instead advancement in Project Gotham Racing requires both driving fast enough to meet the challenge set, and scoring enough Kudos points to advance. Kudos points are gained through the player's driving skills, such as power sliding around a corner at speed, or overtaking non-player characters in the race. There are four world cities realistically recreated, including San Francisco, London, Tokyo, and New York City. 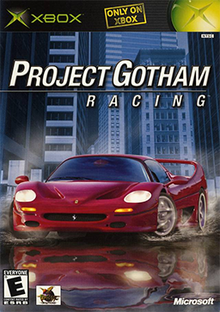