Test Drive is a racing video game developed by Distinctive Software and published by Accolade and Electronic Arts, released in 1987 for the Amiga, Atari ST, Commodore 64, and DOS, and in 1988 for the Apple II, and later ported for the PC-98 in 1989. 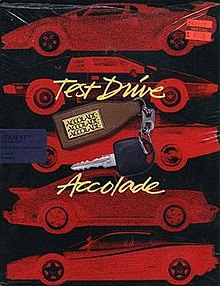