Test Drive Unlimited 2 is an open world racing video game developed by Eden Games and published by Atari for Microsoft Windows, PlayStation 3 and Xbox 360. Test Drive Unlimited 2 includes a variety of roads on the island of Oahu, which returns from the first game, and the new island Ibiza. The game features three main vehicle categories, with each vehicle also belonging to a subcategory depending on quality - A for asphalt cars (A7 to A1), B for Off-road vehicles (B4 to B2), which is a new feature in TDU2, and C for classic cars (C4 to C1) with an additional M category for motorcycles. The vehicle subcategory is noted in the form of a number; the lower the number, the higher the quality. The plot revolves around the player's avatar, who is offered the chance to enter a series of tournaments and progresses through the game in order to eventually become the winner of the Solar Crown by defeating a number of NPCs (non-player characters) in various races. 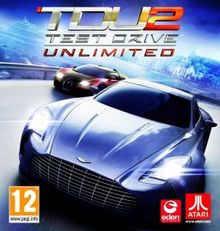